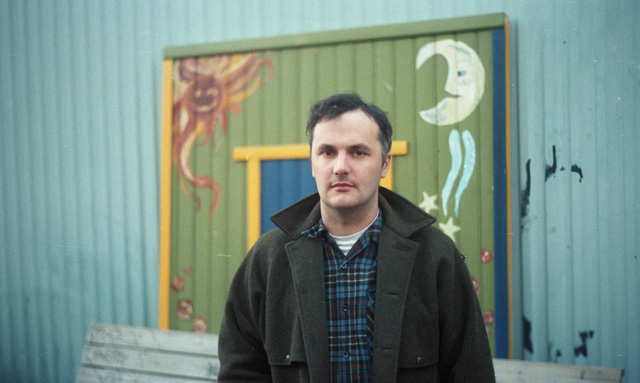 We sent our new French-Canadian writer Éric Morrissette to meet a feverish Phil Elverum at Truckstop Alaska in Göteborg, where his one-man band Mount Eerie was opening for Earth. Robin joined in but sat back while Phil chatted with Éric who offered him some Swedish food: senapsill [pickled herring in a mustard sauce] and gravlax [raw salmon cured in salt, sugar and dill] on knäckebröd [Swedish hard bread].

I should tell you guys that I eat this almost everyday. I grew up with this stuff around. In Seattle, near where I live, there’s a lot of Scandinavian immigrants and my family is Norwegian, many generations ago. In the last 10 years or so I got more into it and I eat this almost everyday, not the herring necessarily but this Wasa [knäckebröd]. It’s so good and you can put anything on it.

These days, what does your diet mostly consist of?
Well, I’m on tour so it’s rough. Hotel breakfast in the morning. I usually eat the muesli, and yogurt and egg and coffee and juice. I usually eat a bigger breakfast because it’s free at the hotel or it’s paid for so I usually try to eat as much as I can, because we don’t usually eat lunch. But yeah, mostly a lot of rice cakes and cheese and water and juice. I like to have grapefruit juice always going on tour for the immune system although it failed [laughter]. And then dinner is usually at the venue or like here tonight they cooked dinner for us and it was amazing but sometimes the venue people will take us out to a neighbour restaurant.

What can we expect to find on your rider?
We’re opening for Earth so it’s their usual stuff which is cheeses, meats, crackers, bread. I usually don’t eat that much of it. Some fruits, some juice when I can. It’s difficult on tour to not eat all the candy and chips that are just constantly available because that’s what is around and when you’re feeling like you want a snack, the first impulse is to put that chocolate in your mouth. But after a few days of that it feels horrible, so yeah, carrot sticks, celery, grapes, things like that. But that’s tour, I should be clear that’s not what I eat at home!

What’s the weirdest thing you’ve ever eaten while being on the road?
Japan is where I’ve eaten the weirdest stuff. Sea food, but a very broad definition of sea food, like anything that comes out of the sea. I told the people who I was touring with there, ”hey I wanna eat the weirdest possible stuff, I am here, I want to experience Japan in its fullest”, and so they were ordering me things, I ate caramelized crickets, just whole crickets, crunchy. Also some fish reproductive systems, like human brains kind of. I was like ”what is this?” -”Oh, it’s human brain, eat it”, but of course it’s just fish uteruses, which is pretty gross as well.

Was it tasty?
Hmm, no. I was focused more on trying to swallow it. I didn’t eat a lot of it. I ate some cow heart once. I gotta draw a line somewhere, though. Like for example in Norway I was at a place where I could order whale or seal and I didn’t want to take it that far for some reason. Meat eating is so arbitrary, the ethics of meat eating, it’s so, I guess personal. But for me, whales somehow feel more intelligent, more godly than me so I shouldn’t eat them. I probably wouldn’t eat a bear either.

What food from back home do you miss the most when you’re on tour?
Vegetables. I mean it can just be hard to get fresh vegetables when traveling. Fresh vegetables of any kind, salad, kale, you know this vegetable kale? It’s a very intense green leaf. You wouldn’t eat it raw, you have to steam it. It’s really thick. It’s very rich in iron and calcium. And it grows all year round. Snow can’t kill it, it’s just so tough. It looks like a dinosaur’s skin. Super dark green. Sometimes it comes in purple. It doesn’t look like food, it looks like something you would see in the forest. We use that a lot, put it in sauces with rice. It’s very nutritious and good. We have some in our garden. So I guess I miss that. I’m a shitty gardener so that’s the only thing in my garden, everything else dies, but kale, you can’t kill it. I’ve tried!

What’s the best food to take on an excursion to the top of Mount Erie [mountain in Anacortes, Washington, Phil’s hometown and current residence]?
It’s a small mountain so you can walk up in about an hour. So, maybe something fancy, some sushi would be good. Yeah, I’d probably take some sushi and some coffee or tea. I don’t know why.

I was told that here in Sweden, people place some Knäckebröd in their pants when they go into the woods in order to protect their legs from the bites of nasty badgers. Are you as creative in Washington when it comes to badger protection?
[laughter] That’s seems like a total myth! That can’t be true. Badgers are not that big of a problem for us and we probably wouldn’t use a cracker for protection! [laughter]. Yeah, no, we haven’t had to face that yet fortunately.

So badgers in Washington are more well-behaved that in Sweden?
[laughter] Yeah, we have really gentle badgers, meaning non-existent badgers! There are no badgers there, as far as I know. Maybe deep in the mountains somewhere there’s one or two. They might be more of a Rocky Mountain thing.

So maybe if you had badgers you would actually put crackers in your pants?
Yeah, maybe i would, probably not though. It doesn’t seem like a good idea. There’s plenty of better weapons.

You have collaborated with ex-Montréaler Julie Doiron on ”Lost Wisdom”. Has Julie introduced you to the national French-Canadian meal ”Poutine”?
Julie hasn’t, but I am married to a French Canadian and she has. So I have experienced Québec through her a lot. It’s good. I love it. It’s intense but I think I tend to like over the top-food. I feel like this is intense in flavor, powerful food.

You find it over the top?
Yeah, because you have all these fries and gravy and cheese and all this intense stuff mixed together.

[Robin]: It’s the fattest thing I have ever eaten!
Yeah, exactly, it’s intensely unhealthy. What, you think its just an average everyday meal? [laughter] No way. I’m surprised you’ve survived if you grew up with it! [laughter]

You have covered Björk in the past [”All is full of love” on the Microphones’ album ”Blood”] and more recently referenced her song ”Undo” [on ”Voice in headphones” on Mount Eerie’s album ”Lost Wisdom]. What would you cook for her if you were trying to convince her to collaborate over a dinner?
[laughter] I probably wouldn’t try to convince her to do anything. I feel like she’s the one who invites people. I don’t want to be annoying. I would probably collaborate with her if she asked me, it sounds fun to me. But if I had to make a meal with her, it’s a good question… I wonder if she has any dietary restrictions.

I guess whale meat wouldn’t be a good idea.
No, maybe not whale. At the same time I feel like she could be into raw meat. Like a big plate of raw meat somehow.

What’s your favorite ice cream flavor?
I like really over the top-ice creams. There was this Ben and Jerry’s flavor for a while that is discontinued now. It’s called ”Marsha Marsha marshmallow” and it was just so gnarly. It was like the Poutine of ice cream with this marshmallow cream and huge chunks of stuff. It was so concentrated and powerful. It was deadly and addictive. It had graham crackers and it was a little bit salty too, it was amazing.

Salty ice cream, eh? Have you tried liquorice ice cream in Scandinavia?
Not in Scandinavia, but I once had it when I was a kid and I remember loving it.

Do you have a favorite breakfast musician?
I almost always, when I’m at home, eat breakfast in the same exact place – in silence. I have a chair by the window and go and read and I eat the same thing for breakfast. I have one piece of toast with peanut butter and lingon berry jam. Silence is what I listen to when I read and I usually spend between one and two hours and I just sit there with a pot of coffee and sip it. Eat my toast and my egg and I read the paper. I love it. I just space out and my cat looks at me. It’s nice, I miss that. It’s the thing I’m most excited about going home for. Like my silence breakfast ceremony.

Whats the cat’s name?
Pierrette. My wife thinks it’s funny. She names lots of stuff after French names that she thinks is hilarious that I just don’t get. She’s really into ”Roger”.

Your music evokes nature a lot. What do you think would be the ultimate culinary experience while listening to Mount Eerie or the Microphones, while sitting by the bonfire contemplating the universe?
Wow. Well my favorite food experiences around a fire are always really primal, like meat-based. Just take some meat, put it on a stick and burn it. But I don’t know if that necessarily matches with my music. But that’s probably what I would choose. I love eating cavemen style. I don’t know how it would affect the experience of my music though.

It would be quite a polarizing experience.
Yeah, maybe like a really primal buffalo steak and then a huge bucket of spring water, ice water that you dump over your head and try to drink at the same time. I feel like a lot of times with my music what I’m trying to do is to create alternating feelings of confusion and cloudiness versus moments of clarity. So maybe if your in the smoke in the fire and you’re all gross and got meat juice all over you and then there’s this awakening water blast. That might be a good meal!